Oh my!
On tuesday, Dec 12, 2006, Katie and I went to our first pregnancy appointment! It was unbelievably fun. We actually got to meet the creature! You know how parents say things like “when you first hold that child in your arms, then you will know what love is like…”? Well, this was an early prototype of that powerful interaction. And what a rush. 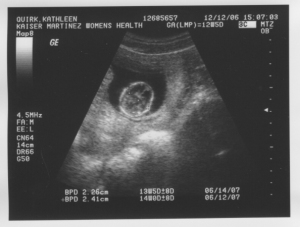 Given that it was an abdominal ultrasound and that we were watching a small blurry black and white image that was constantly shifting and distorting, it’s amazing that one could have any sort of emotional reaction at all. But wow. There’s a person in there, and it’s made out of us! The first thing we saw was the head. A nice little skull, with nice symmetrical brain patterns, lying in a big sac of dark fluid. Must be warm in there. You have to wonder, what sort of things is it experiencing, that new developing brain? What CAN it experience? What can it not? We know it can hear, but what about sight? We know that it’s inhaling a mix of amniotic fluid and it’s own urine (the gross little baber!) but are its tastebuds or olfactory cells active yet? If they are how developed is their connection to the brain? Mostly, of course, we want to know how it feels, what it thinks, what thinking is like for it.

The sweetest part of the whole experience was watching it move. First we saw the heart beating. It beat so quickly, like that of a humming bird! Then later we saw it jerk suddenly. We think that it didn’t like all the new pressure that came from the ultrasound device. After that little jerk it continued to squirm around for a while which was amazing to behold. It sort of flipped on to its side while we were watching, and we saw its legs move around too. We were both surprised at how seemingly long and developed those little legs are! No leg-buds here, folks, these ones can kick!

Of course, none of that motion is caught (what we would give to have a video that we could share and pour over instead of these paltry few shots!). But we are happy with what we’ve got. Perhaps the most endearing part that was captured as a picture was the hand and forearm up by the face. Perhaps sucking on the thumb? Rubbing the face? Waving hi to the parents? What ever it is, it’s adorable.

Make sure to click on each picture for the larger view. There are a few more pictures here, also adorable. For the last one, on its side, you can see that it has it’s hands up near it’s head. The head is the lump on the right hand side. You can see the bones of the skull, and perhaps the jaw? The eye sockets might be in there too. The hands, though, are clear, one is visible as a row of four fingers near the forehead or eyes.

And a neat and clean picture of a healthy spine. Very nice to see, and very mature looking to my totally uneducated and untrained eye. Can you imagine this all in motion? Ah, it was fantastic. Unbeatable, utterly overwhelmingly thrilling. Katie and I are just beside ourselves with excitement – we just can’t wait to meet this little character!

One thought on “We meet our baber!”