On January 18th, 2007, Katie and I got another view of the young one developing in Katie’s womb. We got about a full half hour watching the ultrasound monitor – again, what. a. BLAST. Our nurse-technician took tons of shots too, she handed us a roll so large that she said, “Don’t let anyone see that I took so many pictures for you.” We loved it. And the little kid was healthy and fully formed. She was very adept at determining which limb on which side we were looking at, but while it was confusing at times, sometimes we could also get the broader picture. Some of the diagnostic shots she took, such as various parts of the brian (corpus callosum?) and cross sections of the umbilical cord and the spinal column were amazing too. Neatest of those diagnostic views, though, was the slice where we could see all four chambers of the little heart pumping merrily away! So, we don’t have those, but here are the best of what we do have, starting with the feet. 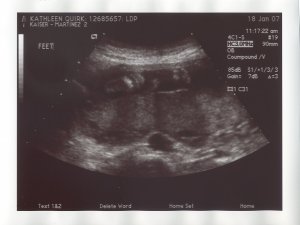 Side by side one in front of the other. We knew from experience that the kid is a dancer, but this must clearly be part of its moves. A shuffle. At least that’s a more fun-sounding interpretation compared with the alternative: the kid was squished with the pressure of the ultrasound wand, which is probably more likely. 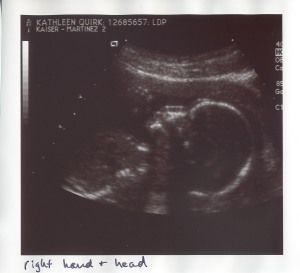 You can see the little hand in front of the face, there. I’m not sure if this was the time, but we actually witnessed the tiny person open their jaw, bring the hand up, and close the jaw again a bit. A thumb-sucking at only 18 weeks! 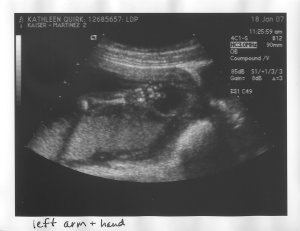 This one is neat, just to see all that fine detail in the miniscule hand. We got to watch those teeny fingers moving individually! Here the index finger and thumb are curled away from the plane of view.

This is just a neat slice because it shows a very adult-like gesture, the whole shoulder and arm together. You can imagine that the little one is pissed from the recent lack of space, and is actively pushing back. Indeed it seems to be.

My absolute favorite! Look at that evil little thing! What little devil-creature! So naughty! A little conniver. You see the ribcage below, and shoulder bones? Just before this picture was taken, the wee one had it’ hands in front of its face, after which it moved them to either side, in what appeared to be a peak-a-boo game. Terrific. I’m happy to announce that in utero our child looks like either a velociraptor or a baby Darth Vader. 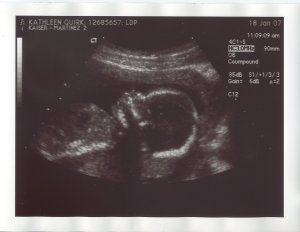 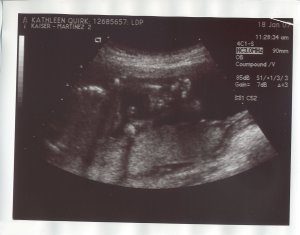 Yes, here we come down to the naked, if blurry, truth. We’ve got a child, and that child has a sex, as evidenced in this picture. Katie and I were equally happy for either, and to be honest, it doesn’t really matter much, we’re more than happy to just have a healthy child. (More results coming, so send good energy!) So, back to gender. See if you can figure out what it is. Can you see the rib cage on the left? On either side of the rib cage are two knees, connected to two shins, which pass down to a couple of little feetsies. In the middle of all that gargantuan cuteness, is the evidence. A little point. According to our technician lady, that’s definitive – we’ve got a little boy. This is a relief, (not that it’s a boy) but that it’s one or the other, because now our name choosing task is half of what it used to be.

As you might guess, we are already feeling anxious about gendering this small person too soon. We are thinking about how to avoid the type-cast colors, clothes and toys for little boys, and would prefer to think of this young thing as it is, a wee child.