Out little boy is growing up fast! First diapers, then sucking on out fingers, then his own fingers, and now: he owns a major motor company. Bavarian Motor Works (owned by Daimler-Chrysler entirely sold out to our chubby little entrepreneurial boy. The first thing he did was go about remaking the logo. He says he has equally radical changes in store for the vehicles themselves:

Liam’s been growing too. Here’s the most recent chart. Names befitting of his level of Chunk: Fatsy, Chubster, Mr. Blubber, and The Piglet. Here’s the Chart:

He’s already reached 15 solid pounds, and we’ve just shed almost half of the clothes we own for him. He’s 1 pound short of doubling his growth weight. The only silver lining to this unbelievable unending growth spurt is that, as you can see above, it’s slowing. (Thank God!)

Liam’s parent’s growth spurts are done, however. Kaput. Here’s what happened to us since January. Notice Katie’s precipitious drop around June 11th. 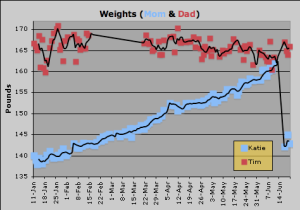