Hello from Kodaikanal, where the women are indeed strong as they carry bundles of firewood on their heads, where the men drink a lot of tea, and where Liam is chunkier than your average Indian baby.

We’ve had a wonderful year. Tim finished his qualifying exams and is now left with only his dissertation, the topic of which has morphed over a couple of trips to India, but he has now narrowed his focus on village communal management of irrigation. The Palni Hills, where we are living, stretch up to 7,000 feet and scrape off rainwater predominantly during spring and fall monsoons. Competition for this water is now becoming fierce as it is needed for the booming residential population, farmland, and reservoirs on the plains. Last year during the dry season, the town’s main reservoir dried up, as did the well-known Berijam Lake, and the town was in crisis. Some theorize the increasing frequency of draught is due to reduced rain fall because of global warming, but our botanist friends who have been here for over twenty years are certain that the widespread invasion of exotic trees is responsible for sucking up all of the water. In any case, water is a hot topic all over India and Tim’s choice to study irrigation is proving interesting. After visiting about X villages he has learned the system of irrigation management is at a crux—some villages still have their traditional system of appointing a water manager who oversees the distribution of water, and others have been forced to disband this local management system in favor of government and police management, which villagers agree leads to corruption and poor management.

Katie enjoyed a good portion of the last year pregnant, which aside from a fairly miserable period of morning sickness, she found intriguing. She wrapped up teaching at Berkeley City College, a job that she loved and was sad to leave, just two weeks before Liam was born in June. Now she spends morning working on writing projects, most recently revision of her young adult novel that had been put on hold since Liam joined us, and journaling about life in India with a babe. As part of this second project, she is working on maintaining a fresh eye on India and not growing too accustomed to the oddities that India presents us with:

• The metal detectors stationed at the exits of airports and the entries of shopping malls. There are invariably way too many staff stationed at them and yet as the machines beep with every other passer-by, signaling the presence of metal, no one bats an eye.

• The negotiable nature of rules. After our third day of being run through the harrowing process of trying to get ourselves registered with the police in Bangalore, which involved getting our marriage certificate faxed to us, meeting with a lawyer in a black robe and white wig to get papers stamped, and running all over the city in auto-rickshaws as we sucked down pollution, we noticed that others slipped money into their passports before handing them off to the officials.

• The ubiquitous noise—air horns on cars; bus engines groaning up to our mountaintop home; monsoon rain thundering on the clay-tile roof.

• And the special treatment Liam gets (more on that later).

She feels really fortunate to have the time to spend afternoons with Liam, going on walks, playing in the garden, and trying to pull off the parent magic of occupying the little fellow while getting housework done. 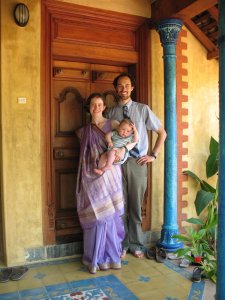 Liam is easily the most exciting change for us this year. We’ve watched him evolve from a dark-haired little larva who was inclined mostly just to nurse, scream when his diaper was changed, and sleep (only on our chests) into a blond, chuckling little fellow, who is way too busy to sleep on our chests, but who would be happy to chat over a diaper change. At seven months, he now babbles a continuous narration of our existence, sits up, busies himself with his toys, and charms us endlessly.

Life in India has offered him some unique experiences. First, we make active use of his Indian middle name (Kiran). We’ve quickly learned that if we tell Indians his name is “Liam,” we’ll get a confused squint, but if we say “Kiran,” we’ll get a satisfied head bobble and comment that we’ve chosen a good name. When we take Liam on his daily walk into town or around the lake, we will inevitably hear people shouting out “Kiran,” most of whom we recognize, but not all. The tourists who don’t know him by name will stop us for a “snap” (we figure there are well over 75 such snaps of this child floating around India) and a cheek pinch. The cheek pinching is always followed by a gesture toward the pincher’s mouth, as if she is consuming some of the chunkiness in Liam’s cheeks. In general, Liam seems to like India, not particularly for the attention (fortunately, he seems not too tuned in to that) but for the constant activity and sound.

We don’t see many of Liam’s peers out on the road. People here believe in the evil eye (jealousy, essentially) to which babies are very susceptible. If a babe has to venture out, there are several options for protection: a black dot on the face to make the baby ugly; girls’ clothes put on a boy (this is a sad comment on gender preferences here); a black string around the belly, a necklace of white beads, or bangles on the wrist to soak up the bad energy. The lady who takes care of Liam in the morning has tried several of these on Liam, though none to much avail—his hands were too big to get the bangles on, the necklace she brought scratched his neck and had to be removed, though the fluorescent, polka dotted, very feminine suit she gave Liam is being put to good use. In addition to keeping Liam well protected from the evil eye, Rani is generous, hard working, and adored by Liam, which could not make us happier.

Though we miss family and friends more than ever and would love to spend this first year of Liam’s life with all of you, being here has been a gift in other ways. We enjoy extra time to be together, many opportunities for walks and hikes, wonderful Indian food, and the promise of newness and adventure right outside the gate of our house, which brings us to our last point—our house. We’re really fortunate to be guests in the home of our friends, the Lockwoods. The house, Shelton Cottage, is one of the two oldest houses in Kodai. It was built in 1845 to house up to three missionary families who retreated up here from the heat and disease of the plains. The house has all sorts of quirky and wonderful features—three-foot-wide mud walls, stones in the yard that look like they were once used for grinding, lovely antique chests and iron wood stoves, and a huge garden with plants including California poppies, a magnolia tree, rhubarb, and some endemic shola trees.

We hope you all are well. We’ve felt so fortunate to receive news from those of you who have been so generous as to post us or email us updates from around the world, and we look forward to hearing from even more of you in 2008.