Liam turned ten last month, soon after we left Costa Rica. There is much we want to remember about his tenth year of life.

Liam remains a man of obsessions–said obsessions are generally tethered to his art table, a critical feature of any Liam abode. In Maine, he sets up shop on the loft with lots of origami paper, pens, and other supplies, and in Costa Rica he made due with our house’s coffee table and whatever he could make into a square sheet for folding paper (receipts, post-it notes, notebook paper, and fliers).

This year, Liam started out the year still passionate about Pokémon. Perhaps it was the combination of cuteness, ferocity, interesting taxonomy, battle potential, and lots of facts to memorize. Memorize them he did, pouring over his 700+ page manual and recording every last detail. I was reminded of 2-yr-old Liam who would recite lines from his favorite picture books as he fell asleep at night. Ever the artist, Liam created a hand-made Pokéball out of a tennis ball and colored balloons, his own intricate origami Pokémon designs, Pokémon drawings, a lengthy written report on Pokémon Go, and ornate card sleeves and carriers.

Sometime around February, Pokémon lost its appeal (there was little left to memorize in the manual, perhaps) and Liam pivoted with a vengeance back to his tried and true obsession: origami. He designed a stunning origami bison skull, a Droideka (Star Wars) model, and an origami Metagross. If we couldn’t find Liam, we simply followed his trail of folded creations and drawings, and voila!

Another passion of Liam’s this year was soccer, or fútbol as he and his Tico friends call it. Liam jumped into the fray of Costa Rican kids’ soccer with great courage, a land where headers are expected (sorry North American docs), footwork is beyond fancy, and the level of play is like nothing we see in the States. The intensity seemed to captivate Liam and he went from a middling, kind-of-interested U.S. soccer player to a guy who somehow always snuck the ball around us and suddenly demonstrated deep ganas (desire) to improve his game. One night in a rough Nicaraguan border-town, Liam watched a group of kids playing fútbol under street lights next to the river, and within minutes he was out on the cement field asking if he could join them.

More than anything, this year Liam revealed his amazing gift for languages. He started out the school year in a Spanish-as-a-Second-Language class but was soon mainstreamed. Before we knew it, he was conjugating verbs in tenses Tim and I have yet to master, getting complimented daily by Ticos for having a perfect Costa Rican accent (not to mention diction, like starting sentences with the Tico qualifier Bueno), and generally soaking up Spanish. Now that we’re back in the States, we still find ourselves turning to him for help whenever we encounter Spanish: searching for obscure words like jaguar or fisheries at our local Spanish table, or trying to make sense of Latin pop songs in the car (Me: “What did the singer just say?” Liam: “He said, ‘Bring me the alcohol to dull the pain,’ Mom.” Me: “Oh!”).

Of course, language is culture and Liam seems to have carried some Costa Rican culture home with him. When we asked him tonight if he would finally (this was not the first time we were asking–the guy often moves slowly) bring his dishes to the kitchen, he said, “Ya lo hago,” which roughly translates to mean, “I’m already doing it.” In an objective–or at least North American cultural–context, this was simply not true, but it was a perfect Costa Rican reply. Liam had started to think about bringing his dishes to the kitchen, so in that sense he was already on the job. He is our pura vida guy.

Liam’s gentle, compassionate character sometimes ran him into trouble this school year. Tico kids play tough, and though there were some equally gentle, lovely kids in his class, there were also some bullies who gave him trouble. Liam’s inclination was to bite his tongue, not to rock the boat (his greatest fear was that he might get into trouble if he stood up to them). We–and his teachers–finally persuaded him otherwise. On the day Liam tackled a kid on the soccer field after the kid bit him, we celebrated by making a cake. It was hard to watch Liam have to deal with bullying, but we realize that learning to stand up to aggressors is perhaps better done at age 10 than 13, or 25, or 40.

At the end of the year, Liam and Reid’s school continued the tradition of a “Meeting for Appreciation,” the sort of ceremony you might do at the end of a camp session. Kids and teachers met in the Quaker Meeting House and stood to share messages of appreciation. Tim and I didn’t make it to this event. We were at home packing for our family’s imminent departure. We should have realized Liam might share something. Throughout the school year, Monteverde Friends School students attend weekly, hour-long, mostly-silent Quaker Meetings, and earlier in the year Liam had risen one Wednesday morning to calmly share a message that teachers told us left them spell bound for days afterward. “He’s a wise old soul,” one generously said.  No other child shared a message during Meetings during the entire school year until this end-of-year Meeting for Appreciation. Sure enough, within an hour of the end of Meeting for Appreciation, we received a flood of messages from friends and teachers who were impressed with what Liam had shared and with what friends had said about him. “What a good kid,” they commented. One friend said that if we had been there, we would have needed “muchas tissues.” 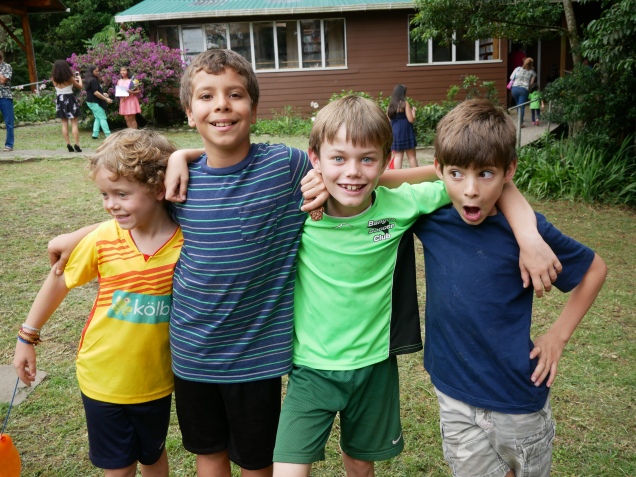 He’s a lovable fellow, Mr. Liam, and what a treat it has been to watch him grow in Central America this year. Happy birthday, kid.